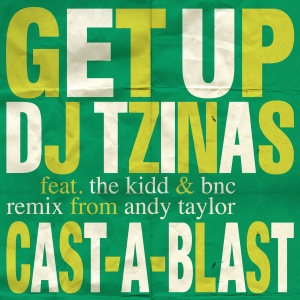 Those nice gents from Cast-a-Blast have blessed my inbox with yet more promo loveliness, this time from DJ Tzinas which I felt compelled to share with you this morning – raging hangover, or no raging  hangover.

Best get the coffee on and hope inspiration strikes ‘eh?

The title track, Get Up (feat. The Kidd & BNC) is straight-West Coast Hip-hop beat harking back to the beats from the turn of the century. Based on a booming snare snap and piano loop, with the odd soul cut sliced inbetween the MCs, it’s a proper little head nodder.

Remix duty is provided by Andy Taylor  – who made one of my current “go-to” early evening tracks, ‘Bank of Panama’ – and brings the Gypsy Kings vibe, with a stack of Latin inspired percussion and picked guitar. Carnivale!

Available now from junodownload (and probably many other places too …)

Obsessive music nerd for since his formative years, Sherlock Ohms finally pulled his finger out and started inflicting his collection of Funk, Soul, Hip-hop, Reggae, Breaks, Beats and random ephemera on the unwitting public in mid-2008. Since then he's graced the airwaves of Big Chill FM and Purple Radio, the stages of the Festinho festival, and the DJ booths of the UK fluffing for the likes of DJ Moneyshot, Boca 45 and Ugly Duckling. Whether it's early morning chilled wig outs, or eclectic party starting beat fests there's a reason they call him 'No Shit Sherlock' END_OF_DOCUMENT_TOKEN_TO_BE_REPLACED
This entry was posted on Saturday, November 19th, 2011 at 1:17 pm and tagged with BNC, Cast-A-Blast, DJ Tzinas, Get up, Hip Hop, The Kidd and posted in Review. You can follow any responses to this entry through the RSS 2.0 feed.
« Three on a Thursday #42
Three on a Thursday #43 »