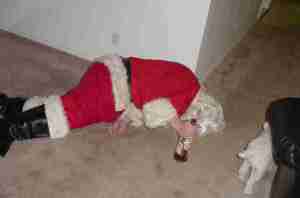 Ho-ho-ho, Merry Christmas, and all that jazz. Come and let Santa unload his bulging sack of tunes all over your ears (ewww…)

Right, just to state this will not be a ‘three of the most tenuous Christmas themed bootlegs that I’ve had inflicted on me this week’. It will be a proper Three on a Thursday, with quality tunes.

First up we’re playing the bass-weight game. Regular blog-bothers Ewan Hoozami and Dave Remix have joined forces and given a wobbly workover to everyones favourite cut and slice merchants anthem The Avalanches and their classic Frontier Psychiatrist. Behold – Box Rocket present Avalanche Psychiatrist – hold on to your speakers!

Number two this week comes courtesy of Cardiff head, and fellow Purple Radio jock,  Marky De Sade – as I was scrubbing the ‘net for this week tunes, he kindly dropped a link to his Top Twenty of the Year, and this acid drenched chuggy wobbler entitled Von Glooperstein originally by Hizatron, but given the ole switcheroo by everyone favourite tea-and-beat-merchant, Mr Scruff is probably the pick of the bunch for me – hypnotic wee bugger innit …

Lastly this week it’s a slow little stepper from Portugals finest, Dedy Dread. Go Miller samples a bunch of loops from  the Jazz-Swing king himself and lays them over a nice little snapping beat – simple, but then that’s often best.

Obsessive music nerd for since his formative years, Sherlock Ohms finally pulled his finger out and started inflicting his collection of Funk, Soul, Hip-hop, Reggae, Breaks, Beats and random ephemera on the unwitting public in mid-2008. Since then he's graced the airwaves of Big Chill FM and Purple Radio, the stages of the Festinho festival, and the DJ booths of the UK fluffing for the likes of DJ Moneyshot, Boca 45 and Ugly Duckling. Whether it's early morning chilled wig outs, or eclectic party starting beat fests there's a reason they call him 'No Shit Sherlock' END_OF_DOCUMENT_TOKEN_TO_BE_REPLACED
This entry was posted on Thursday, December 22nd, 2011 at 10:00 pm and tagged with Avalanche Psychiatrist, Avalanches, Box Rocket, Dave Remix, Dedy Dread, ewan hoozami, Frontier Psychiatrist, Glenn Miller, Hizatron, Marky de Sade, Mr Scruff and posted in Three on a Thursday. You can follow any responses to this entry through the RSS 2.0 feed.
« Johnny Pluse / This Will Twist Your Head
Flatline feat. Werd2jaH / Slow Down »