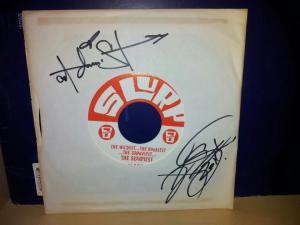 Reminiscent of Double Dee and Steinski’s seminal ‘Lessons’ series but with the added bonus of being done live rather than over painstaking months with a razor and sticky tape, Brainfreeze is the hip-hop tour de force from DJ Shadow and Cut Chemist.

Consisting of two 25-ish minute mixes entitled Uno and Dos, Brainfreeze started life as a recording of a practice session for a series of shows that the pair were to perform in ’99. It’s a masterclass in cutting,scratching and beat-juggling old funk and soul 45s, slicing sections of tracks in and out of one another whilst maintaining the overall flow of the mix, which in my opinion is something a lot of more ‘technical’ DJs can forget in an effort to flex their skills.

The original mix was sold on CD at shows at  Shadow’s Fall 1999 US tour, and Cut Chemist’s first Word of Mouth tour with Jurassic 5.  Only two stores in the world were authorized to carry the original CD: Aron’s Records in L.A., and Groove Merchant in San Francisco. Numbers were limited to 1000 at the show, with a further 1000 being made available for sale in local shops and the covers rip-off of the distinctive 7-Eleven branding soon bought the ‘cease and desist’ wielding lawyers down on the pair, stymieing future sales – though this hasn’t stopped a huge number of bootlegs being made though (if you’ve got the vinyl, it’s a bootleg, none were ever officially pressed)

It’s all damn good mix with a multitude of killer funk cuts from Eddie Bo, Rueben Bell, The Mar Kays, Rufus Thomas, Marlena Shaw, even Georgio Moroder and a whole host of samples of old adverts and films – but I think my favourite section is halfway through Dos, when it breaks into a proto-Number Song. and the beat is kept rolling through the different samples and cuts that make up a damn fine tune, before mutating into a similarly early sounding version of Organ Donor – class all the way through.

Obsessive music nerd for since his formative years, Sherlock Ohms finally pulled his finger out and started inflicting his collection of Funk, Soul, Hip-hop, Reggae, Breaks, Beats and random ephemera on the unwitting public in mid-2008. Since then he's graced the airwaves of Big Chill FM and Purple Radio, the stages of the Festinho festival, and the DJ booths of the UK fluffing for the likes of DJ Moneyshot, Boca 45 and Ugly Duckling. Whether it's early morning chilled wig outs, or eclectic party starting beat fests there's a reason they call him 'No Shit Sherlock' END_OF_DOCUMENT_TOKEN_TO_BE_REPLACED
This entry was posted on Tuesday, January 24th, 2012 at 11:02 am and tagged with Brainfreeze, Crate Digging, Cut Chemist, dj shadow, slurp and posted in Mixtape Madness. You can follow any responses to this entry through the RSS 2.0 feed.
« Three on a Thursday #50
Three on a Thursday #51 »