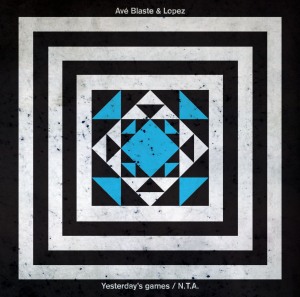 First review for a while but as it’s new beats from the Keep Up! boys – Yay!

Keep Up! #11 sees label stalwarts Ave Blaste & Lopez hitting us with the double A-side “Yesterday’s Games/NTA” a lovely sort-of-beaty-disco-synthfest-with-a-hiphop-mentality – I do like the tracks this label drops as they seem to almost wilfully defy any attempt to neatly pigeonhole them in a genre, whilst giving us the good stuff.

First up Yesterday’s Games. Built around sliced up soul vocal with a gorgous echoing bassline, it’s is a lovely little late night downtempo chug. I can see this one

NTA houses things up a little, but with more key changes than your average. Tidy beat and few nuggets of acapella over the top make for a boogie-tacular tune.

This drops on the 16th April on Limited Edition 7″/WAV/320MP3 and is available from junodownload, Kudos Records and your usual vendors.

See the press spiel below …

Keep Up! Records’ first release of 2012 is a new collaboration between two of its most prolific artists. With recent releases and remixes on Ninja Tune, Tirk, Wah Wah 45s and Brownswood, Avé Blaste & Lopez specialise in soulful, bass-heavy beat music. With support from different corners of the dance music spectrum such as Mr Scruff, Bonobo, Dom Servini and Toddla T, this new joint effort is another genre-defying double A-side.

As with many of their collaborations both tracks are hard to pin down but hint at hip hop, disco, boogie and even slo-mo house. Yesterday’s games is a downbeat, soulful modern cut taking influence from Loose Ends’ 80’s masterpiece Hanging on a string or the best of Cameo’s output. On the flip N.T.A. raises the tempo with a low slung 4/4 house beat. Featuring female vocals and chord changes this 100 BPM soulful groover will appeal to fans of modern 80s boogie influenced beats.

Both tracks are already receiving support from the likes of Gilles Peterson, CDR’s Tony Nwachukwu, Simbad and Dom Servini. The single is available on limited 7″ vinyl with full artwork as well as digital. As always with Keep Up! Records a vinyl purchase entitles the buyer to free high quality mp3s of both tracks.

Obsessive music nerd for since his formative years, Sherlock Ohms finally pulled his finger out and started inflicting his collection of Funk, Soul, Hip-hop, Reggae, Breaks, Beats and random ephemera on the unwitting public in mid-2008. Since then he's graced the airwaves of Big Chill FM and Purple Radio, the stages of the Festinho festival, and the DJ booths of the UK fluffing for the likes of DJ Moneyshot, Boca 45 and Ugly Duckling. Whether it's early morning chilled wig outs, or eclectic party starting beat fests there's a reason they call him 'No Shit Sherlock' END_OF_DOCUMENT_TOKEN_TO_BE_REPLACED
This entry was posted on Wednesday, March 21st, 2012 at 9:38 pm and tagged with Ave Blaste, Keep Up, Lopez and posted in Review. You can follow any responses to this entry through the RSS 2.0 feed.
« Three on a Thursday #57
Three on a Thursday #58 »