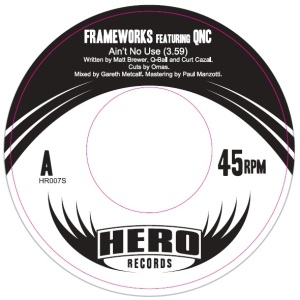 Right, it’s time to roll out the big guns. Frameworks new joint should do it …

Ain’t no Use is a proper headnodding, nay, almost neckstapping number, featuring two of my favourite MCs from the Grand Central days,   Long Island‘s Q Ball and  Curt Cazal. Built over some sweet cuts and a Fleetwood Mac-ish guitar loop, this is superb stuff

The flip continues in the retro hip-hop vein, with a sample sounding like it’s straight out of Aim’s early playbook – which is no bad thing, as I was a huge fan. Classic does what it says on the tin

Drops on 16 July 2012 on limited edition 7″ vinyl from here, and digitally here

Obsessive music nerd for since his formative years, Sherlock Ohms finally pulled his finger out and started inflicting his collection of Funk, Soul, Hip-hop, Reggae, Breaks, Beats and random ephemera on the unwitting public in mid-2008. Since then he's graced the airwaves of Big Chill FM and Purple Radio, the stages of the Festinho festival, and the DJ booths of the UK fluffing for the likes of DJ Moneyshot, Boca 45 and Ugly Duckling. Whether it's early morning chilled wig outs, or eclectic party starting beat fests there's a reason they call him 'No Shit Sherlock' END_OF_DOCUMENT_TOKEN_TO_BE_REPLACED
This entry was posted on Monday, July 2nd, 2012 at 8:17 pm and tagged with Aim, Ain't No USe, Classic, Curt Cazal, Frameworks, Grand Central, Hero No 7, Hero Records, Hip Hop, Q Ball, QNC and posted in Review. You can follow any responses to this entry through the RSS 2.0 feed.
« Three on a Thursday #69
Three on a Thursday #70 »

One response to “Frameworks / Ain’t No Use b/w Classic (feat. QnC)”