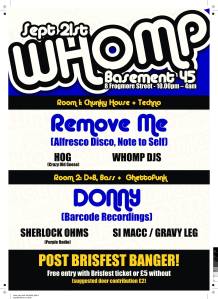 A change from the usual bimbling blurb this week, as I actually have something to say in my preamble for once, and it’s very simple,

First up this week is

Fancy some sliced and diced disco tinged funky nonsense? Sounds like you need Fulgeance and DJ Soulist  or Souleance (see what they did there) and their “Cest La Fete” remix of Brenda Russell’s A Little Bit Of Love.

Number two this week is a properly swinging number … no. no, not like that, no pampas grass around here … from Sammy Senior. simply called Bounce – which describes the bassline perfectly. Loving the big band horns on this one.

Should be a free download coming imminently on the soundcloud page … keep your eyes peeled.

Finally, we’ve got something a bit more mellow from the whitest blues vocalist around, the utterly awesome Rag N Bone Man. Taken from his Dog and Bone EP made alongside Leaf Dog,  this is Nobody.

Obsessive music nerd for since his formative years, Sherlock Ohms finally pulled his finger out and started inflicting his collection of Funk, Soul, Hip-hop, Reggae, Breaks, Beats and random ephemera on the unwitting public in mid-2008. Since then he's graced the airwaves of Big Chill FM and Purple Radio, the stages of the Festinho festival, and the DJ booths of the UK fluffing for the likes of DJ Moneyshot, Boca 45 and Ugly Duckling. Whether it's early morning chilled wig outs, or eclectic party starting beat fests there's a reason they call him 'No Shit Sherlock' END_OF_DOCUMENT_TOKEN_TO_BE_REPLACED
This entry was posted on Thursday, September 19th, 2013 at 7:50 pm and tagged with A Little Bit of Love, Blues, Bounce, Brenda Russell, Dj Soulist, Fulgeance, Ghettofunk, Hip Hop, Leaf Dog, Nobody, Rag'n'Bone MAn, Sammy Senior, Soulenance, Swing and posted in Uncategorized. You can follow any responses to this entry through the RSS 2.0 feed.
« Three on a Thursday #105
Three on a Thursday #107 »